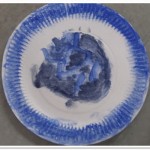 The Blazing Pattern Plate There is a big fire on my plate. It has big, zigzag flames. For the flames I mixed half blue and half white paint. There is lots of thick blue smoke. I mixed black with a little bit of blue for the smoke. It blazes and shines a lot. I came up with this idea because I like the way flames go up. Kevin Laffan 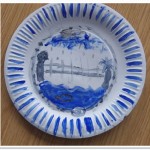 The Mad Island Plate My plate has mixed blues on it. There is a big storm on my plate. There are lots of birds behind the storm. You can also see coconut trees, a big fence and a noisy sea. I love seas and coconut trees and I thought of a sea and a storm as the idea for the pIate. Thérèse Rochford 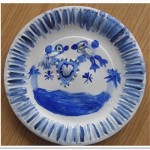 The Dotty Plate I mixed blues and black and white to make this plate. The border is made up of light blue and dark blue. My plate has two birds flying. The birds are carrying a love heart and they are looking at each other. There are two stars at both sides. Also there are two palm trees. I came up with this idea from a story that I really liked. Rachel Sheedy 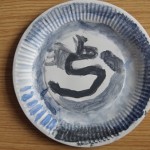 The Snake Pit Plate This plate has lots of different blues. There is a snake in a pit waiting for prey. The snake on the plate is a cobra. There are rocks around the border. The snake is very muddy. He has two horns on his head. I got this idea because snakes are my favourite reptiles and the cobra is my favourite snake. Luke Kavanagh 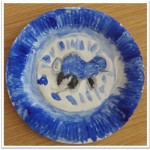 The Dragon Plate The plate is blue all over. It has dark blue, light blue and pale blue. There is a dragon breathing fire on the plate. The dragon’s legs are black and white. Around the dragon is fire that he has breathed already. The idea popped into my head. I got it from my imagination. Liam Hayes 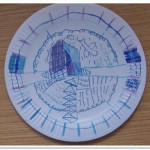 The Plate of Joy and Life The name of my plate is ‘The Plate of Joy and Life’ because there is lots of joy and life on it. I used markers and crayons to make my plate. On my plate there are lots of blues and patterns. On the border there are some flags and lines that join the stripes together. There is a pool, a house and birds on my plate. There are also some flowers and water. There are patterns on the path up to the house. I got this idea from the feeling of being outside. Laura Purcell 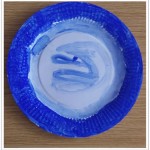 The Sea Dragon There is a big dragon on my plate. This Dragon is the King of the Sea. He doesn’t breathe fire, he breathes water. He protects the sea. The little fish are friendly to him. The idea came to me because I heard about Neptune King of the Sea and because I like dragons. John Phillips 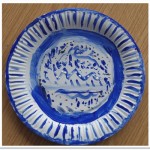 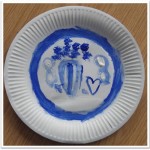 The Fab Plate My plate is called ‘The Fab Plate’ because I think its name suits it and I think its fab! My plate has two eights on it, which were meant to be lines. It has blue dots on the top and a white sea on the bottom. It has a tiny heart beside the big heart. It has a blue border around it. I got the idea of the dots on the top. I thought that they would look like strange blue clouds. Claire O’Meara 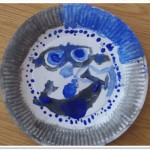 The Mister Plate I picked a face for my plate because I really like drawing people and dot patterns. The face is a man. He has glasses and his tongue is sticking out. He is laughing really hard. The plate has a dotted line on the second border. I like Maths so I did fractions on the border. The blue part is one quarter and the grey part is three quarters! Ciara Ivers 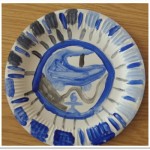 The Amazing Tank Plate This plate is about a war. There is an army tank fighting against a person and it’s in a rocky place. The blue line border is representing a road. The army tank is blue and strong and the person looks frightened. I picked a war because I thought that blue is rough and a war is rough and the rocks are rough. I got this idea from a World War Wii game. Bobby Doheny 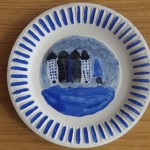 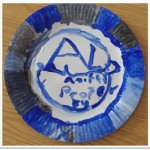 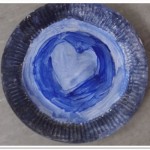 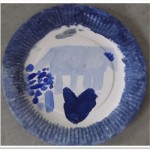 The Robot Horse Plate I named him ‘The Robot Horse’ because he has a triangular head and metal legs. He is white and blue with a medium tail. Patrick Brophy 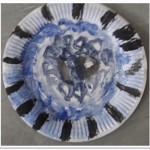 The One Direction Plate I mixed blues for my plate. It is my favourite piece of art. Keep an eye out for the ID and the love hearts! Louise Bergin 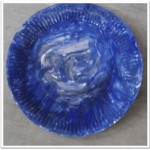 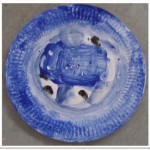 The Flying Car Plate I got the idea for a flying car from doing ‘Chitty, Chitty, Bang, Bang’ in school. Then I thought of putting my flying car under the sea. My flying car is blue. The sea is around it and there is sand around it too. It has very good wings. Jason Kelly 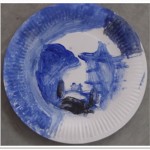 The Blue Pattern Plate There is a house and a tree on my plate. There are two people walking on a bridge. I painted this because I had an idea in my head from the Willow Pattern story. Eimear Nolan

The Robot Territory Plate On my plate there is a girl kidnapped in a robot. The robot is planning on turning the girl into a monster. She is fighting until it is too late. The robot is under water. He is getting fuel from the water. He is very dangerous. The girl will be dangerous soon. She is scared of the robot. I got this idea because I love robots and I think robots are cool. Eamonn Long 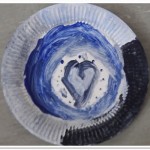 The Blue Love Plate My plate is called Blue Love. It has a love heart on it. I have all sorts of blue on it. I love my family and that is how I got the idea. Dolores Laffan 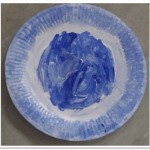 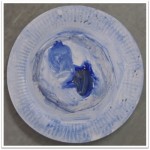 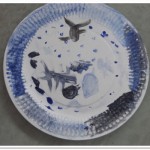 The Flying in Space Plate I thought about this first. I like space. On this plate there are three rockets flying in space. There are rocks in space too. You can see a big space ball and a satellite. You can see the moon too. It has a different colour blue on it. Conor Gleeson